It snowed in the night.  When I awoke around half past four there was an orangy-glow in the gaps of the window blinds and my first thought was, 'It's snowed.'  Funnily enough only yesterday evening W and I were 'crowing' because the map of the weather on television showed swathes of Britain covered in the stuff, whereas Manchester area was unaffected. Big laughs all round, because it's nearly always us who gets the lot being bordered by the Pennine Hills the clouds need to rise up to fly over and ooops they dump the lot on Lancashire and Yorkshire.  It's been really bitterly cold for the past few days even the magpies have been staying in their nests.  When we were children you hardly ever saw magpies in the towns, you felt really lucky to be able to shout, "Morning Captain!" Or "Morning Mr Magpie, how is your Lady wife and family?" and salute  if you happened to spot one, now you'd be thought as mad as a hatter in a sock factory if you went about saluting all the time.  There are so many of them chattering and bounding around you'd have repetitive strain injury!  They're beautiful colours if you really look at them, iridescent blue, green and purple.  My brother had a friend at school who kept a Jackdaw as a pet, it used to talk he tells me.  I have a very vague memory of seeing it one day, it was upon the boy's shoulder out in our back yard.  Was it speaking?...I can't remember.  I wish I had a pet jackdaw now or even a pet crow. 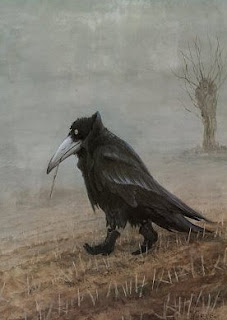 Posted by Half-heard in the Stillness at Tuesday, November 30, 2010 7 comments: 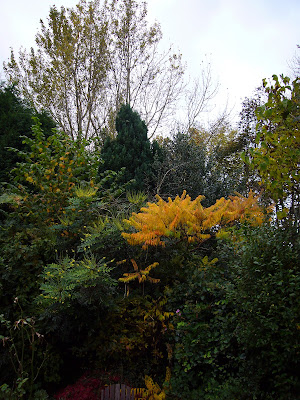 The smallest of taps on the window-pane make me look up from the book I am reading. A great wind blows
cold raindrops against the glass hurling itself into my pine tree as though some wild thing resides within, thrashing and swaying.  Grey skies sail above wet slate black roofs and silver tear drops slide down glass in rivulets of reflection.

Once long ago now, we drove between dense forests of pine trees in a Czechoslovak summer.  Either side of us flashes of endless dark trees made that soporific noise..'Wahh wahh' as we pushed the air of them past us.  The long undulating road ahead stretched to an incline and twilight settled softly like a moth.  Suddenly from one side came a creature, magnificent in bearing, standing far enough ahead for us to slow to a creeping roll.  A king of the ancient forests, his stance and antlers proudly upright he was framed for no more than a heartbeat.  Yet the thrill of his majesty, his maleness his absolute power over his dominion is etched into my being - he was not afraid!
Posted by Half-heard in the Stillness at Saturday, November 20, 2010 6 comments: 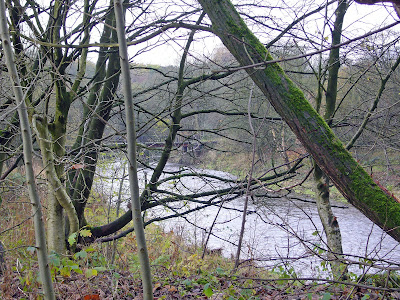 The river lies below us at the bottom of a steep 1/10 hill and this morning there is a strong wind blowing so that brittle leaves swirl from the trees in golden confetti, and seagulls having followed the coursing river inland from the sea, swoop and ride the buffeting currents in a silver-grey sky.
I have lived near fresh-water most of my life, even as children we were very aware of living in an important area.  Then the industrial heart of the North of England, Manchester has six rivers nearby, the Irwell, the Medlock, the Mersey, the Irk, theTibb and Tame.  Canals were also greatly instrumental in enabling the transfer of goods right into the heart of the city. The Manchester Ship Canal brought ocean going vessels and featured daily in our young lives...
"The big ship's sail on the Alley Alley O!
The Alley Alley O
The Alley Alley O
The big ship's sail on the Alley Alley O
On the first day of September."
was sung out loud frequently in the grey school playground next to the steep embankment of the first Steam Railway in the world.  Whilst the Duke of Bridgewater's canal wound it's way towards our city carrying coal, cotton and numerous goods, even crossing the Manchester Ship Canal via the Barton Aqueduct and the first ever Swinging Bridge, a marvel of the modern world of 1893.

Photo: Wikipedia
Posted by Half-heard in the Stillness at Friday, November 12, 2010 10 comments: