As some of you already know I don't go out very often now, so my mind often turns to memories and remembrances.

When my eldest daughter was small we lived in Scotland in a huge white painted farmhouse called Yonderton at the top of a long tree-lined lane.  To the left of the house stood a byre where the farmer who rented Yonderton to us kept a special cow or two.  They looked like Jersey cows to me, because their faces were soft and expressive and their hide was that wonderful honey brown shade, but being a city-bred person I probably guessed incorrectly, maybe they were just being fattened for market, a horrid thought.   'S' and I visited them often because they didn't seem to be put out into the fields, spending long days in the cowshed with only the light from the wedged open doorway and the tall sash window which was permenantly dropped open, the top over the bottom leaving a big opening to capture the sweet Scottish airs.  One morning we made our usual visit and my attention was quickly caught by a small blue fluttering bird trapped in the crevice between the two window panes.  It was too high to reach from the inside of the shed so we made our way around the front to see if I could reach it from there.  I didn't have a ladder and I'm not sure what I must have used to stand on after all the years spanning between then and now, but somehow I managed to climb up precariously, and reach down between the two panes to rescue what I now realised was a baby swallow.  This tiny blue-blue beating heart settled for a few seconds upon my outstretched palm before suddenly taking flight up up and away.  This then became my regular rescue-mission throughout the summer, as the swallow babies learnt to navigate through the opening without first having to stop on that dangerous perch atop the two sashes.  I remember I felt so privileged to be able to hold those feathers of midnight-blue lightening for a second or two, before they took off to practise more aerial gymnastics throughout those days of summer skies long gone. 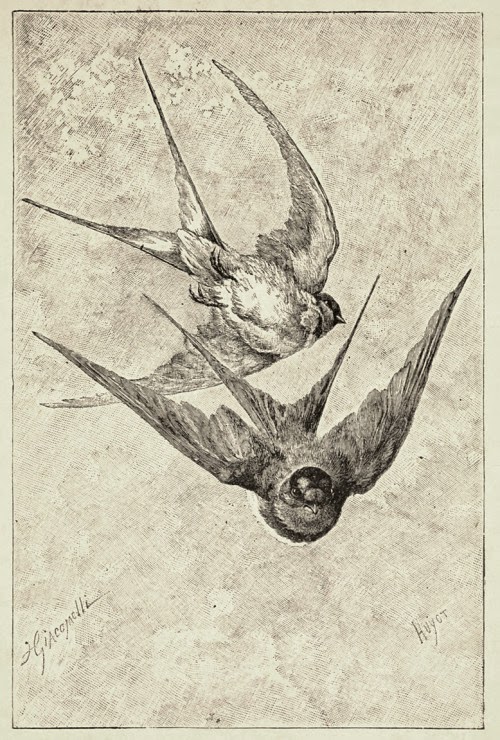 Swallows.  by Leonora Speyrt,  from:- 'A Canopic Jar'         Illustration: Hector Giacomelli,'With the Birds' via: archive.org

They dip their wings in the sunset,
They dash against the air
As if to break themselves upon its stillness:
In every movement, too swift to count,
Is a revelry of indecision,
A furtive delight in trees they do not desire
And in grasses that shall not know their weight.

They hover and lean toward the meadow
With little edged cries;
And then,
As if frightened at the earth's nearness,
They seek the high austerity of evening sky
And swirl into its depth.
Posted by Half-heard in the Stillness at Tuesday, March 31, 2015 8 comments: