When we moved from the big house it was because someone forgot to check on things and suddenly the lease on the land which had been 99 years long was...up, so the house and land reverted back to the descendants of the original owner.  Drastic news for my parents, they had only a couple of weeks to rehouse their family, so we ended up in a terraced cottage with no electricity connected, no bathroom and cockroaches carpeting the floors like shiny black linoleum.  It was a massive shock for my mother as she struggled to make a home for us.  My dad chopped-up the piano to make her a display bookcase and every Friday evening the zinc bath was unhooked from a wall outside in the yard, brought in by the fire and filled with buckets of water heated in an old boiler, for her to take the first bath.  It can only have been huge disappointment to her, she'd been brought up in a family who had been used to servants.
My sister who was twelve years older than me and was used to her own room in the big house, now had to share her space with me, a five year old.  But, how glad we were of each others company, on those first few nights when the candles were blown out, leaving only a night-light in it's saucer of water flickering in the cold darkness and there began a wailing and crying coming through the walls from our next door neighbours.  Banging on the adjoining wall was our neighbour's adult son suffering, we were told later from schizophrenia, he couldn't sleep because of the voices, but in the dark strangeness of this old cottage it seemed like we had moved into Bedlam itself.  The stairs ran adjacent to each other in the terrace and we later heard the old man from the other side stumbling up his staircase talking and talking to himself, we were hemmed in by people who had lost their minds its seemed.
Some weeks later after he had been taken away to a hospital we learnt the story of our neighbours son, he'd been jilted at the altar by his fiancée, and back in 1954 they knew very little about schizophrenia and the connection severe stress can play in its development.
We never did find out anything at all about our neighbour the other side, apart from the fact that he was an old man living alone, who shunned contact, he never spoke to anyone except his imaginary companions.  His garden was a complete tangle of raspberry plants, so dense, that one day when I'd illicitly climbed over the wall separating our gardens so I could gorge on his luscious raspberries, crimson and jewel-like and all the more delicious in their pilfering, I was completely invisible to him when he trundled along the path with not more than a couple of yards between us, still having an animated conversation with his invisible companions.

My Mum-in-law was also my lovely friend - I wonder how often any of us can say that?
She was Dutch, born in Jakarta on Java 81 years ago, the child of a girl who fell in love with Ferdinand a married man, who was part Serbian, part Czechoslovakian, which was all the information she could find of her father when years later she searched, and searched.  So, my Mum-in-law was heartbreakingly given up to be adopted by the Matron and her husband, of the nursing home where she was born.  She must have led an idyllic life on the island,  described as paradise on earth, with it's green rice-fields, distant mountains and tropical sunsets, that is until the second world war wrenched that life-style from them, flinging her and her adopted mother into one of the horrendous concentration camps formed by the Japanese invaders, whilst her adopted father and  older brother were separated from them to be sent to one of the men's camps.  The death rates in these camps was between 13 and 30% and as a consequence her adopted father sadly died there, only a few days before they were liberated.

She didn't speak a lot about her time there, and always answered our questions with,
"I can't remember a whole lot except to say, I remember the hunger.  The terrible hunger - I was always hungry.  And I can remember having to stand for long hours in the baking sun at roll-call.  And I remember the Japanese."
She could not be in the same room or on the same side of the street with someone Japanese even after sixty years.

She told us a story of one day standing queueing for something and of hearing a violin being played somewhere nearby in the camp, she could recall the sound clearly.  It wasn't until years afterwards that she discovered that the person she had heard playing was her real mother, they had been interred in the same camp, and that her mother had been a gifted musician.  But at that point she wasn't even aware that she was an adopted child, that was a fact she stumbled upon when she was in her twenties.  During a time whilst her adopted mother was in hospital she was asked to produce some document or other and my friend in her search for it came upon her adoption papers.  I can only imagine what a massive shock that must have been. By then they had been repatriated to the Netherlands and my Mum-in-law was working as a nurse/midwife.  Eventually she met her husband an Englishman and they moved to England, where they were together for over fifty years and had five children.   She did manage to trace her real mother again many years later, but alas too late to meet her, but she never forgot the violin music she had heard being played that day in the camp.  So yesterday because I was unable to attend her funeral I listened to that music - to Beethoven's Violin Concerto in D Major, Opus 61, in honour of my lovely, lovely friend, that little girl all those years ago. 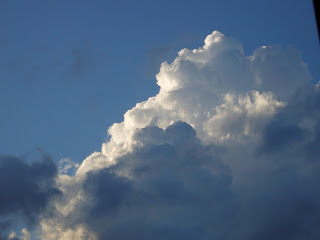 
Your way begins on the other side
Become the sky
Walk out like someone
Suddenly born into colour
Do it now.

Rumi
Posted by Half-heard in the Stillness at Thursday, April 04, 2013 8 comments: