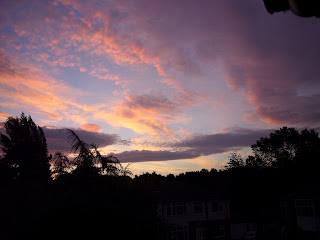 The last thing I do each night after switching out my lamp is to open up one of the Venetian blinds.  The window is a bay and as I awake in the morning the first thing I can see are trees along the top of a hill on the golf-links and one large pear-tree lacy with white blossom.  I can kid myself I am somewhere in the country even though the sounds of the awakening city intrude.  Sometimes I can catch the most glorious dawn light, the sky slowly flushing from pink to deepest rose, and even the sound of occasional traffic cannot interfere with the serenading birdsong. I can think back and place myself aged fourteen leaning from a casement window in Wiltshire, feeling the crisp cool bite of early morning and looking down towards a damp brick laid path, then out across a meadow to brown and white cows quietly lying in the grass where they had crushed the wild mint beneath their bulk so that its sweet smell permeated the still cold air.
We would drive down to Wiltshire to visit my dads sister when she was the headmistress of a school there,  that's the school-building in my header photograph.  There was also a tied-cottage where she and my Nanny lived  a little way from the school, a perk that went with the position.  It was the end cottage in a terraced row, with a long wrap-around garden to one side, and all that lush meadow out at the rear, and to the front across a lane in the purple distance arose Roundway hill long reputed to be a haunted place.
There were enough rooms in the cottage for us to stay and I remember mostly the gentility of the place somehow.  Those rooms with soft moss-green carpets, bookcases filled with interesting illustrated books, 'The Yellow Book' with it's racy drawings of Aubrey Beardsley, poetry books galore and all of the Wainwright books, watercolours of the lake-district and mountains, always a copy of The Telegraph folded to an unfinished crossword puzzle on the coffee table or on the arm of Nanny's chair.  I'm trying to think of how to describe the atmosphere that I can still call to mind after almost fifty years.  A shushed quiet, a feeling of time slowed down, even though there were clocks that ticked and hummed,  kettles that boiled, tea that was served in tinkling china teacups brought to the table on a silver-tray, voices that were lowered, movements that were slower, books that were read instead of television watched, good manners and respectability.  A teacher's sanctuary. 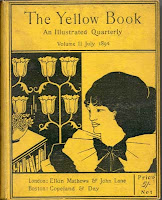